We have officially launched! 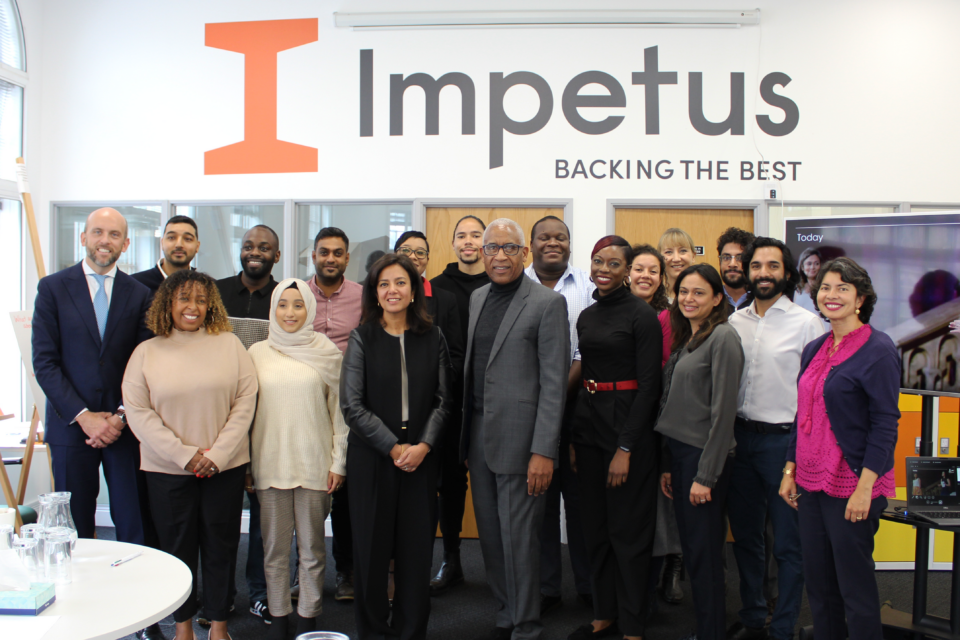 After months of preparation – and no small amount of excitement – we were delighted to welcome the first cohort of the Impetus Leadership Academy (ILA) to our central London offices for the programme’s kick off session.

Participants travelled from as far as Edinburgh and Birmingham to attend a full day workshop, giving them the opportunity to meet the Impetus team and, crucially, each other – a group of peers we hope will provide support, inspiration and friendship to one another during this course and on through their leadership careers.

The group were welcomed by Impetus CEO Eleanor Harrison, and her young son Max - who provided some light relief as only a 2 year old can - while bringing home the fact that we are all juggling real lives with work all of the time, and that great leadership comes in many guises.

Eleanor spoke about her own 16 year leadership journey, stressing the importance of developing and feeling comfortable your own unique leadership style, actively listening to colleagues, and asking for feedback and endeavouring to learn always.

She highlighted the importance of avoiding the trap of hiring in your own likeness, instead hiring people with different perspectives and skills to build a diverse and well-functioning senior leadership team. 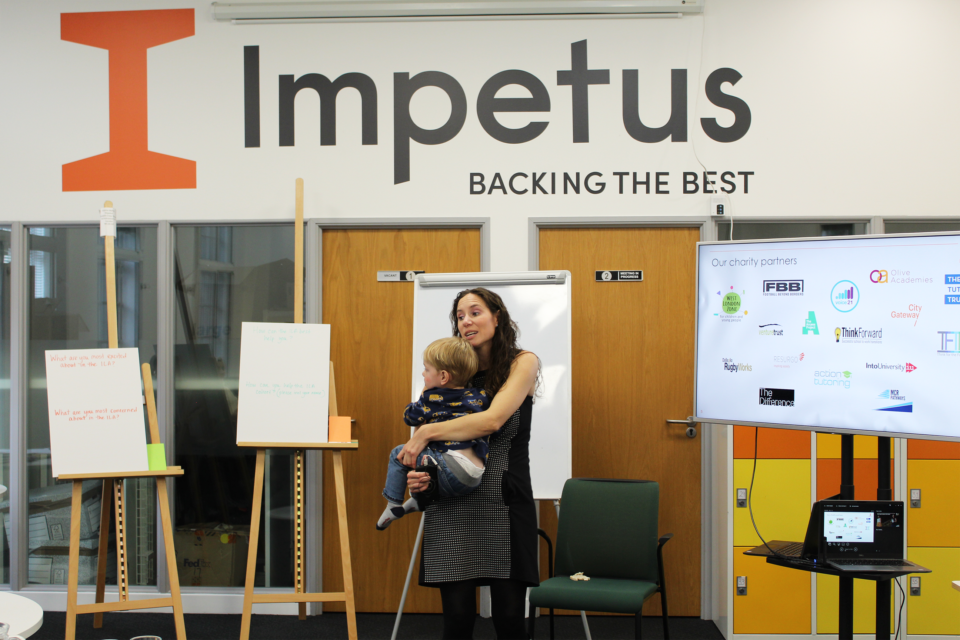 We were thrilled to welcome Saba Nazar; Managing Director, co-head global financial sponsors group at Bank of America, without whose support the programme would not be possible. Saba spoke passionately of her, and her organisation’s excitement about the programme and their commitment to investing time and resources to ensure all participants are supported to fulfil their potential.

Bank of America is committed to tackling the issues of race and ethnicity and has launched a 1.25 billion dollar programme of giving including philanthropy, sustainable finance, thought leadership and advocacy. 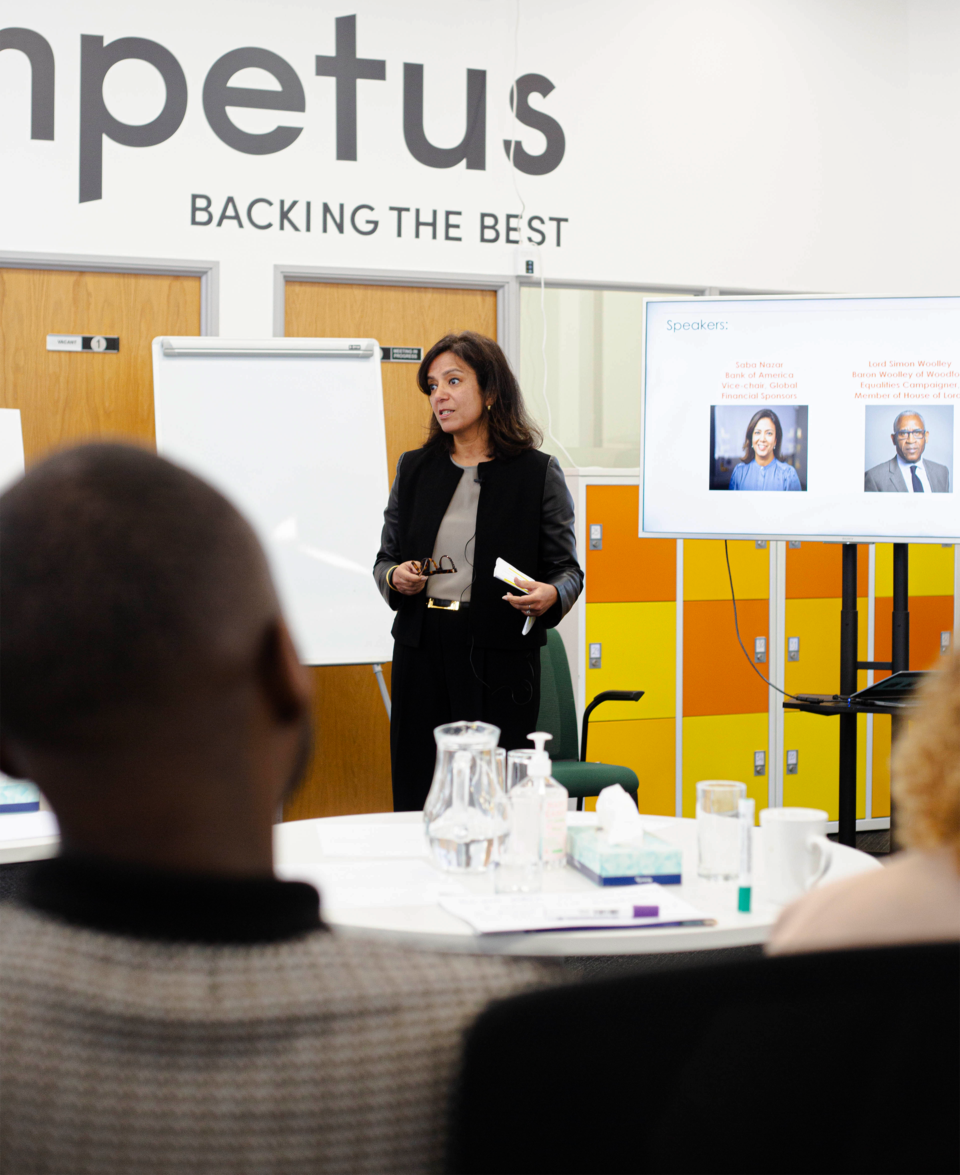 Saba mentioned personal challenges from her own leadership journey, the hurdles she has had to overcome as an Asian woman working in the city.

She thanked the cohort for their participation in the programme’s rigorous selection process, and for all they are already doing for society and young people, concluding: ‘We hope that it (the ILA) will result in each and every one of you being even better than you are today!’

We at Bank of America are committed to advancing racial equality and I want you to know that as a firm we are going to continue to invest time and resources to help all of you achieve your full potential. We can’t wait to see what we can achieve together.

We were honoured to welcome Lord Simon Woolley to speak to the cohort, a man who can be credited as a major influence in the development of the ILA – an impassioned speech in the House of Lords resonated with Impetus Senior Investment Director Chiku Bernardi, setting off a chain of events – and here we are!

Lord Woolley wowed the audience with his eloquence. He spoke of his excitement to be in the room, looking at the next generation of minority ethnic leaders – opening with ‘I’m not asking, because we’re done asking, now we’re demanding. I’m demanding your success because we need you.”

He spoke with passion about Marcus Rashford’s listing as number 2 on the Black Power List (he himself is number 8), a young man with no university degree, advocating for young people from disadvantaged backgrounds: “That's the thing about black leadership, you don't have to wait until you’ve got grey hairs, you really don't, you just have to believe.”

He recalled being given the opportunity by Prime Minister Theresa May to create a strategy to tackle race equality, the scale of the challenge, and his determination to aim big. A determination that led to the creation of the Race Disparity Unit, “the first government unit of its kind in any modern democracy.”

There’s no time for that imposter syndrome anymore. In leadership roles you must come out of the shadows, look in the mirror and say ‘I can, I really can’

And he talked of the purpose of the ILA being to inspire the group to “transform our institutions to make sure they are inclusive, to make sure that they're representative”.

Lord Wooley spoke earnestly about the importance of the cohort having the drive and self- confidence to believe that they are capable. “You'll be knocked down - that's on them. But if they come back and you're still on the ground, that's on you. You get up, you brush yourself down and you say ‘this is the black experience, the black journey but I won't be defeated. There's too much for me to do’.”

This self-believe, he urged, should be the golden thread through all that the participants learn from the Leadership Academy, and be taken on into their leadership careers. 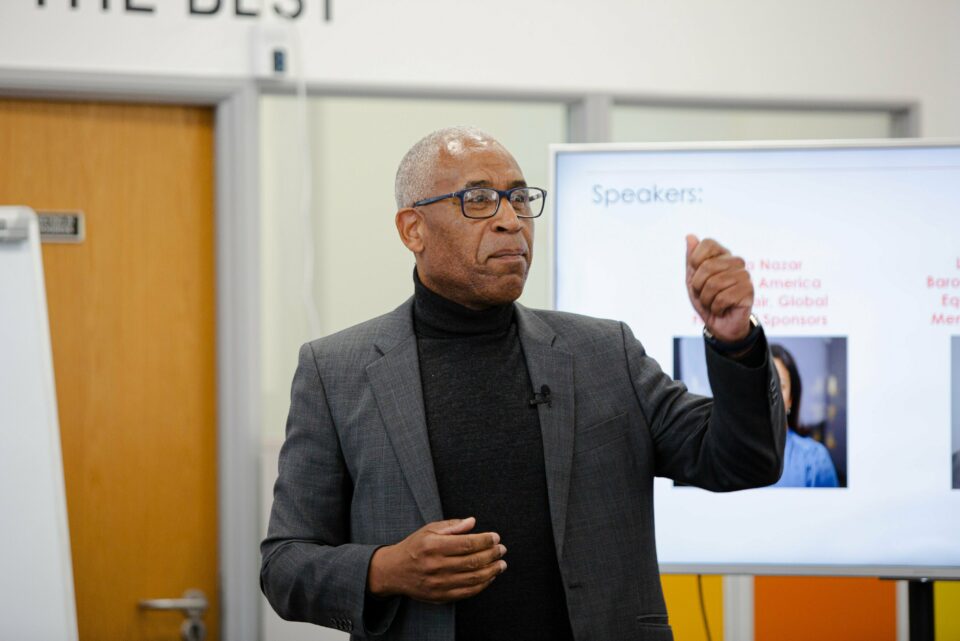 Our final speaker was Chris Murray, the no-nonsense CEO of the Young Brent Foundation.

Chris was generous in sharing his own personal experience, his family’s move from Jamaica to London and the upheaval that caused, as well as the challenges encountered throughout this career on account of his race. Before leading the Young Brent Foundation Chris worked for youth services in Local Authorities. During the course of his career he learned that his skill and ability was within him, not within the organisations he worked for, spurring him on to become a leader.

Inspired, humbled and delighted to be a part of a game changing programme! Here's to us, the next generation of emerging leaders. Thank you to Impetus - Backing the best and Bank of America for creating this initiative.

Chris opened by asking the cohort to note down their own personal timeline, acknowledging times of trauma and upset, like when they first experienced racism, in order to help make sense of their own narrative.

He talked about how his upbringing inspired him to work in the sector, with the ambition to improve the lives of the children and young people around him “so that they don't have to have some of that traumatic experiences that I did”.

We all know race is a social construct, it's not real. But racism is very real. The resilience you're going to have to bring is about who you are as human beings. You're personal identity, your history, whether you're a man, you're a woman, your faith. However, you see the world, don't disguise it.

He spoke about youth work being fundamentally about education, about making a difference, and making an impact, “it’s about the importance of recognising how young people see the world, their barometers of success and the barriers that are holding them back.”

He told the group that to be leaders, they must think about how they’re going to engage with the community and the authorities - the police and other statutory bodies, “they may have a lens on the world, which is different to your own, but your outcomes are always going to be the same.”

What a day it was! Big shout out to the incredible cohort of speakers and emerging leaders and Impetus - Backing the best and Bank of America for putting this together 🎉.

Chris didn’t shy away from talking about the racism he has encountered in his working life, people’s refusal to accept his position, or work constructively with him, because of his colour. He urged the participants: “as leaders, don't be frightened to use your ability to ask questions because you don't know where it might lead you. Educate yourselves. Pose questions. Challenge.”

He said: “We all know race is a social construct, it's not real. But racism is very real. The resilience you're going to have to bring is about who you are as human beings. You're personal identity, your history, whether you're a man, you're a woman, your faith. However, you see the world don't disguise it.” 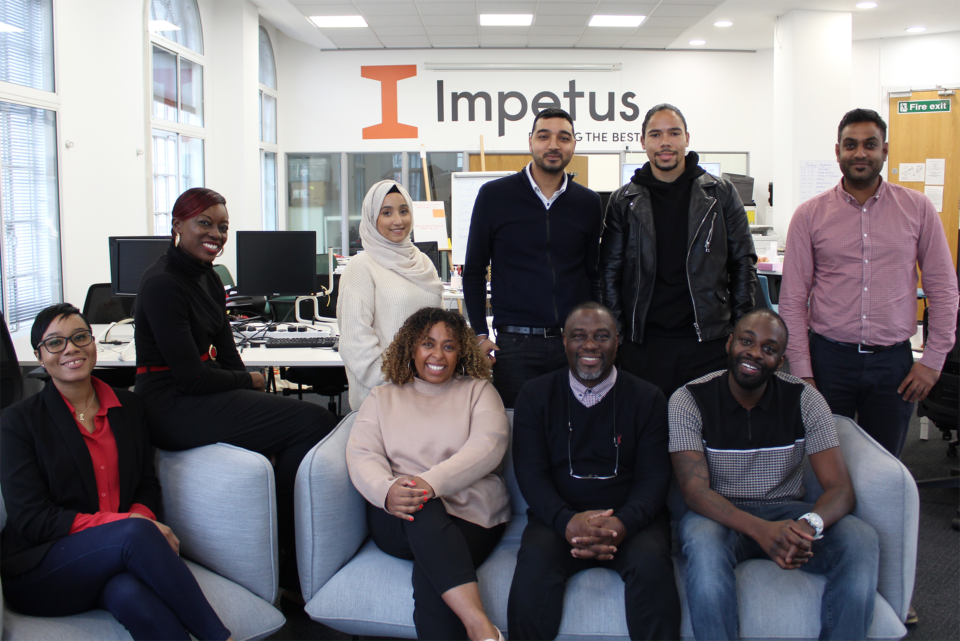 About the Impetus Leadership Academy

The Impetus Leadership Academy has been designed in response to a specific problem – that of a lack of diversity at the senior levels of the UK youth sector. By extending Impetus’ leadership expertise and experience to a group of emerging leaders from minority ethnic backgrounds already working in, and dedicated to, the youth sector are setting out an ambition to change the status quo and in turn better represent organisations and their beneficiaries.

The 2021/2 cohort will participate in a series of masterclasses, benefit from 1:1 leadership coaching from Impetus experts and mentoring from a member of Bank of America staff.

Using our expertise to change the sector

Sherine Mahmoud, Senior Investment Director at Impetus, on why the Impetus Leadership Academy is such an important, and timely, initiative.
Read More

We were founded on a belief in social equality – that all young people should have the same chance to succeed whatever their background.
Read More